Keeping friends and family updated on our adventures in the US is one of the functions of this blog. Suppose I should start actually doing that. I wrote this particular blog entry on January 16 and never got around to posting it.

We started off in mid-October in Dallas, where we spent some time with my parents, saw some friends, and bought a used hybrid car from a dealer that had mounted deer heads on the walls. Using trial and error, we learned how to fill the tires of our fuel-efficient Prius, and off we went to Austin. We gave ourselves a week to look for housing while we were dogsitting in West Lake Hills, a well-off and friendly community only a few miles from downtown. In the end, housing found us.

Elmar is interested in solar energy and wants to get into this field. A neighbor down the street from where we were dogsitting had solar panels on his roof. Elmar got introduced to Harry, and the two of them climbed all over the roof together. The next day at a neighborhood barbeque, Harry and Nancy offered to let us stay in their guest house for a few months. 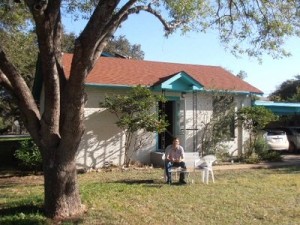 Life is funny sometimes. In Luxembourg, I paid 550 euros a month for a tiny furnished room in a cramped 20 person house sharing a window-less kitchen and bathroom with four guys. The neighbor upstairs sounded like an elephant stomping around every morning before 7am. When Elmar came to visit for two weeks, we literally had to communicate every step in order to navigate that room. In Hamburg, we started out sharing a minimally larger furnished room in a flat share for 600 euros a month. We moved into our own apartment six weeks later, which we received essentially as a construction site. It took us another six weeks to fix it up enough that it didn’t feel like camping. So this comfortably furnished guest house was perhaps karma paying us back for our bad luck the past two years. Or maybe Harry and Nancy are just incredibly generous people. In any case: what a great welcome to Austin.

I immediately got started with the process of applying for grad school, but I made time for fun stuff as well. Unless you have a job or school that facilitates it, building social connections in a new city is usually a long process. Luckily, I reconnected with some old friends from Dallas and Boston, and met a few new people through Boston University alumni events, friends of friends, etc. We’re also getting to know different areas in and around Austin. In particular, we’ve enjoyed natural areas like Lake Travis, Hamilton Pool, Mt. Bonnell and the Barton Creek Greenbelt. 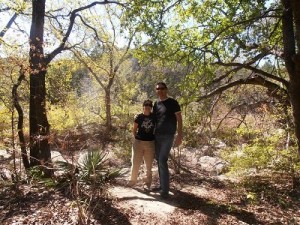 We’re also getting to know where the best happy hour cocktails and appetizers are. So far we’re big fans of the Iron Cactus on 6th St. and Abel’s on the Lake at Lake Austin Blvd. We’ve explored the galleries of East Austin and the live music venues on Red River. But somehow I think we’ve just scratched the surface.

We drove to Houston to spend Thanksgiving with the cousins of my childhood Thanksgivings. My folks drove in from Dallas, and my brother Shane flew in from LA. This was my first Turkey Day in the US since 2003, and it was fun to introduce Elmar to this quintessential US holiday. He especially liked the pecan pie. Shane, Elmar and I took off for Corpus Christi on the Friday after Thanksgiving. The boys went kitesurfing and I just enjoyed the beach. Port Aransas is a great little beach community that I think we’ll visit often.

For Christmas, we spent some time in Dallas. It was nice to catch up with friends who were in town for the holidays. Also, my mom and I did some decluttering. When I left for college at age 18, I also left a bunch of junk behind. So finally, my trophies from softball in the 80s have been recycled. I sold a few things that are now considered “vintage”. It’s an ongoing process that will take some more time to complete, but I felt really good about purging junk that was clogging up my parents’ house.

Elmar and I spontaneously decided to go to New Orleans for New Year’s. Even more spontaneously, my friend Chris, who was visiting from Japan, decided to come with us. That was great, as I hadn’t seen him since I visited Japan in 2006! Elmar and I stayed with my cousin Sidney, who was known in the family for doing crazy things. I hadn’t seen him since I was a pre-teen. It was wonderful to get to know him again as an adult. The crazy stories were still crazy, but in a really interesting and entertaining way. That seems fitting, considering his involvement in the tourism/entertainment business in New Orleans. He’s currently the owner and founder of Haunted History Tours. And seeing as how I’m probably considered the crazy cousin who ran off to Europe, I can relate. 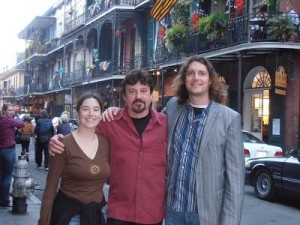 Now I’m pretty much looking for work and getting ready to start back with roller derby. Ideally, I’d like to work with university students again in a study abroad office, but I’m open for many types of opportunities. Also, I hope to get back into writing. In particular, I started a trilogy of “heritage essays” that I’d like to get back to.