Recently, I’ve been thinking about dissertation topics in a more concrete way. Right now I’m thinking about examining the effect of drama-based instruction techniques in undergraduate foreign language courses on students’ transcultural competence, that is, their abilities to function across cultures. Specifically, I’d like to focus on students’ abilities to recognize their perspective from within their own cultural membership and to open themselves to the perspectives of people from cultures different than their own. While this may never result in complete understanding, empathy is an important trait of social interaction.

But I’ve also been thinking of another trans lately: transgender. 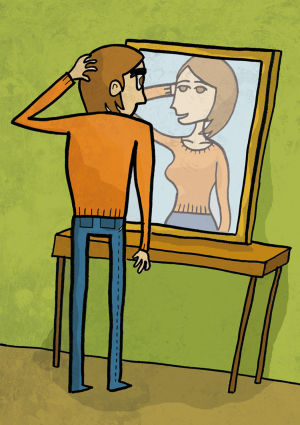 First, let’s talk terminology. To be transgender means that a person’s gender identity is different than the identity assigned at birth. Sexuality and anatomy are different issues. Gender/transgender refers to culture: social behaviors, identity and perceptions.

There was a Time Magazine cover recently titled “The Transgender Tipping Point: America’s next civil rights frontier”.  While the story by Katy Steinmetz was a balanced mix of background information, statistics, and stories about the experiences of a few diverse individuals, I found the most interesting quote to be a detail in parentheses: “(This article will use the names, nouns and pronouns preferred by individuals, in accordance with TIME’s style)”. That’s an important linguistic decision that shows respect and normalcy.

I too want to tell stories of three transgender women from my perspective as an outsider, a cis female. I offered to change their names to protect their privacy, but all three of these women gave me their explicit permission to use their real names. I like this, as I can write in greater detail without having to change their stories to protect their identities. Also, their willingness and relative nonchalance about being open indicates something good about the current state of US society.

In college, 1998-2002, I played bass drum in the Boston University Marching Band. Bass 2 out of 5. We were five people who played the split parts of one instrument. We also worked as part of a larger team, the drumline. Dale played tenors and was section head my sophomore year. While Dale was a good leader and musician, I remember occasionally being annoyed at what I perceived to be macho behavior. “Dale broke another mallet?” Overcompensation…

I learned a few years later that Dale identified as female. I don’t remember exactly, but I think she told me in an email. A long email. I didn’t know this was a thing. She invited me to ask questions and offered to explain anything I wanted. I don’t think I was ready to ask, much less formulate questions. It wasn’t that I was judging her, I just couldn’t quite wrap my head around the concept.

In 2008, I threw an “it’s too late” bachelorette party for myself and a friend during a brief trip back to Boston. We had both married internationally and hadn’t had a chance to celebrate with friends from undergrad. I invited Dale, who had transitioned but kept her name. She had the idea to play drums for the musical Hedwig and the Angry Inch to raise money for her hormone therapy. She was living and working as a female. Face to face, I didn’t really know what to talk about beyond reminiscing about our antics on the drumline. But I was glad she was there. I hope she was glad to be there.

By 2013, I was living in Austin and playing roller derby. The derby community is open to a wide range of gender and sexuality alignments. The reasons for this development are probably documented elsewhere on the interwebs. If you’re interested, the Vagine Regime is a good place to start. (Editor’s note: look at who comes up at 2:16!)

So when I heard that Fifi Nomenon is trans female, it wasn’t a big thing to wrap my head around anymore. While I wouldn’t have necessarily guessed it, I wasn’t particularly shocked either. It was as if someone had told me she likes cheese pancakes: unusual, but not a huge revelation that negatively or positively impacted my overall opinion of her as a skater and person. Way more relevant to my opinion: She’s an all-star Texecutioner and she’s on Team fucking USA. We share a derby number, 108. I respond well to her training style and she’s supported my team at some of our scrimmages, most notably, an ass-whooping at Rollercon 2013 (Team Free Radicals vs. the Anti-oxidents, which turned out to consist largely of Windy City skaters). She and her girlfriend publicly display their affections through intelligent puns on facebook. And I met her as a she, so nothing about that changed.

Fifi’s real name is Penelope. I assume she chose that name, possibly in the same way she chose her derby name. I don’t know what her name was before. That’s something I wouldn’t ask unless we were having a more personal conversation about the past. The closest I ever was to having a conversation about her transition was in her kitchen while she was preparing BBQ. I had a derby-related research project idea and was explaining to her the difference between quantitative and qualitative research. “Quantitative research: on a scale from 1 to 7, how satisfied are you with your experience chopping sausage? Qualitative research: tell me about your experience chopping sausage.” I don’t remember whether we shared a look, a brief laugh, a meaningful “Hmm”, or a comment, but I remember we had a moment. That moment was to the effect of “isn’t this funny and ironic. Let’s talk about something else. Okay, cool.”

This is something with which I feel I can empathize. During the 8 or so years that I lived in Germany, others made me into the token US American. Especially during the 2003 Iraq war, I sometimes just wanted to go to a party without discussing George W. Bush for the umpteenth time. But this comparison can only go so far. While I worked to become linguistically and culturally German-like, in the end, I identified as bi-cultural. To this day, I identify with traits, values, and behaviors from both cultures. And, while I disagree with some aspects of American culture and society, I’ve never felt like I was born in the wrong country.

With this in mind, I’ve tried not to make Fifi into the token trans woman. Well, until this essay. Hmph, how do I dig myself out of this contradiction?

The day after writing a first draft of this post, I had brunch with my derby wives, Hatch and Mo, and our mistress, Cue (the practice of having derby wives is another fun topic documented elsewhere). I asked them how they thought Fifi would react to my post and told them about the sausage story. After some brief discussion, Cue said, “Wait, Fifi is a trans woman? I never would have guessed that.” My immediate thought was, “Oh no, I outed her!” But then Cue continued nonchalantly, “Hmm, interesting.” I then told them about my cheese pancakes analogy, and Mo responded, “Is that a European thing? Dutch like cheese pancakes too!” Hatch added, “All I can think about now is cheese pancakes and how I have to try that!” We then moved on to talk about Fifi and a few other skaters and why we liked them so much. We later danced with a parrot named Rowdy to Copacabana.

So that’s why I’m including Fifi’s story from my perspective: to illustrate normalcy. And derby love: it’s a real thing.

And as to my “token trans woman” conundrum, Fifi’s response to an early draft put my fears to rest and sums up exactly what I am trying to convey: “I can only imagine it forwards the cause to have trans people out there living their lives, being happy, making friends, and not making a big thing out of it.”

Also in 2013, my old friend from high school, [pre-Allie], posted on facebook that she was transitioning. I never saw this coming, but I was happy for her. She was taking hormone therapy, her wife was extremely supportive, and she was living in a progressive city on the West Coast. She. Her. Her name is Allison. Allie.

I found it so hard to switch names and pronouns for a person I hadn’t seen in years. [Pre-Allie] is who I know from high school. I haven’t met Allie in person yet. So when she posted something about the anniversary of making her true gender alignment public, I commented that I only know [pre-Allie] and would like to meet Allie.

I thought I was being oh so supportive and tolerant. A few days later, she wrote me a personal message politely requesting that I remove her pre-transition name.  She knew I was not trying to cause harm, but she didn’t want to be referred to as [pre-Allie] in any way, especially on her anniversary post. I had no idea. I had never considered that she may want to distance herself from who she was the first 30ish years of her life. While I have had many identities and subculture memberships, I had always melded these many facets into one whole identity. I couldn’t fathom trying to remove any piece. My empathy had reached its limits. I still have a lot to learn about her perspective.

But I think I get it a little more now. In a prior draft of this piece, the first paragraph of Allie’s section intentionally mixed pronouns as a rhetorical device to convey my own linguistic and conceptual difficulties. While she recognized my narrative choice, Allie gently reminded me that it’s best practice to use one set of pronouns, and that she still preferred for me not to use her pre-transition name. I still had a hard time grasping this. It felt like she was denying her past. She explained to me that her new name is actually just a different label for the fundamentally same person. That’s when it hit me: maybe Allie was always there. She’s just more visible now. And happier. Woah.

Talking about a trans person’s past: http://www.entirelyamelia.com/2014/06/10/amelia-teaches-trans-101-refer-trans-persons-past/

And here’s a link to a photography project that features a former student of mine: http://www.transcendinggender.org/

In the end, transgender issues are also transcultural issues. Cultures aren’t limited to national cultures. To be transgender means to be a part of a minority subculture that has its own practices, products, and perspectives (to frame it in terms of foreign language education, from ACTFL’s “3 Ps” of culture). Transgender culture can be misunderstood, leading to its members having to fight for civil rights. As in all cultures, membership is fluid, and any individual may identify more or less with this community. Others outside of the transgender subculture may support or reject the norms, practices, and realities of transgender people. They may also be well-meaning and misunderstand or mess up.

I may never completely understand what a trans woman experiences. And I may make mistakes. Even in writing this piece, I’ve hit boundaries. But, as I am recognizing my own perspective and subsequently opening my worldview, I hope and believe that others are as well.

Thanks to Dale, Fifi and Allie for letting me share your stories.