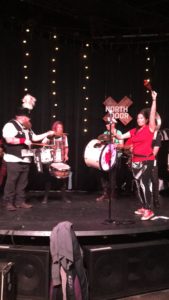 I can’t find a snare photo, so have a vibraslap instead.

Managing expectations: Just like you can’t be immediately fluent in a language, I’ve had to go into these endeavors with patience.

I was hired as a senior lecturer and head of the German Department at The University of Texas at San Antonio, UTSA, three weeks before the fall semester. One of those weeks was already devoted to organizing a professional development for language teachers (The FLLITE Approach is great for encouraging multiliteracies and embedded culture at all language levels). The next week was a camping trip to West Texas. That left one week to scrape together four courses with three unique preps.

As I was scrambling to create syllabi and doubting myself in August, a sympathetic friend asked if I could talk to my supervisors about their unrealistic expectations… turns out, I was the one expecting me to move heaven and earth. That helped me reset and do the best I could in the context I was dealt.

I’m slowly able to add in improvements, and next semester I’ll have even more bandwidth open for developing better tasks, assignments, interactions, and interpretive work with texts. After two months at this institution, I have a better sense of how to build the curriculum and grow the program. But that takes time. It’s okay if I don’t offer a faculty-led study abroad program until summer 2020. It means I’m able to partner with a professor who is taking students to Frankfurt in 2019, and I’m in talks to co-create a spring 2020 course on great European cities and matching summer program with lecturers of French and Italian.

And I’m taking steps to ensure my first online course ever next semester will be interactive and interesting. I’m taking an online course myself through the Goethe Institute and am experiencing how the asynchronous assignments build into a synchronous component. I’m experimenting with differentiated written discussion boards so that my cross-listed German culture courses also infuse language without leaving out the non-German speakers. I’m attending a webinar tomorrow about using a video chat software to facilitate oral discussion. It’ll get there.

To learn and improve on snare drum, I’ve left my practice pad out on the kitchen island. Sometimes I play for 30 seconds and that’s it, but that’s fine. 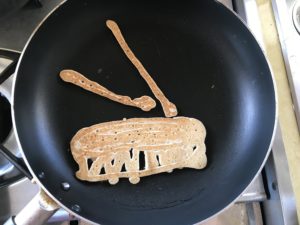 I’m now playing snare with the Yes Ma’am Brass Band of Austin, TX. So my initial goal has been for this authentic context: to learn / create a simplified snare part of all of their songs. And by stroke of luck (no pun intended, for real), I’ve had substantial and appropriate scaffolding in performing with this new group on this new instrument. I knew most of the band members through the Honk!TX community. Also, I started playing snare with Dead Music Capital Band, a group with which I’ve played auxiliary percussion since 2015. So the songs weren’t new, and I am good at listening to play by ear. I could focus my attention to coordinating two sticks instead of one, to moving around different tools (including the snare head, cowbell, cymbal, rim of drum), to blending the sound with the rest of the band. Although I don’t regularly play snare in this band, that occasional experience lets me tackle the new songs with my newfound drumming “vocabulary.”

To continue the language learning comparison, I’m maybe at an ACTFL novice high or intermediate low or ~B1 on the Common European Frame of Reference in terms of my drumming, but that’s enough for me to get out there and communicate. My first gig was playing only two songs, two days in a row within the supportive context of an all-female Bedpost Confessions reading. That was in July. I could work with a focus to prepare those two songs. The next gig was in October at a craft beer festival in which we played an hour-long set. I had plenty of time in between to learn one new song per week. So I learned my simplified version of that new song and went back to review the others. I printed out cheat sheets for myself, but had no simple way to attach them to my cymbal or drum. So I went out there, made “mistakes,” but committed. If I had intended to play one way and it came out another, that was fine until I could reset. I gained confidence. And now we played a Halloween gig, and the beats are coming naturally. I even kept my snare on to play with Dead Music, playing both my normal auxiliary parts on tambourine, cowbell, and cymbal; and also adding stuff I’d never physically played to songs I’ve known for a few years. I even took my first drum solo in a song called Dead Fro. The drummers trade licks, and I’ve been known to jump in on cowbell or vibraslap. This time, I mixed in snare. My solo wasn’t mind blowing, and it wasn’t even solid at the end. But it was fun, and I did it, and next time will be even better.