Once upon a time, in October 2005, two twenty-somethings met at an African drumming course at the Blaue Fabrik (Blue Factory) in Dresden Neustadt, Germany. 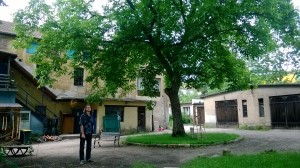 Blaues Fabrik is still there, sort of… I think the land was sold with the idea of keeping it as a cultural center, but there were complications.

He wanted to practice his English. She was just starting a master’s program in German and had no interest in giving free English lessons. But he had an funny-looking recumbent bike, so she gave him her number. He texted her later that week (in German) to invite her on a motorcycle ride to Königstein, a historic baroque fortress in a nearby national park. That was the beginning of a lovely friendship and Pride and Prejudice-like flirtation.

The summer of 2006 was magical. Germany hosted the World Cup soccer tournament, the weather was sunny, and the Buntes Republik Neustadt (BRN – Colorful Republic of Neustadt) neighborhood festival was amazing, as usual. Those two twenty-somethings finally overcame their stubbornness in the Kunsthofpassage (art courtyard) and started dating.

And here we are at the BRN, 9 years later.

But this time I have Muskelkater (literally a “muscle hangover”) from roller derby training with the very welcoming Dresden Pioneers. It’s nice when two very familiar worlds collide. And yes, that pun was intended. 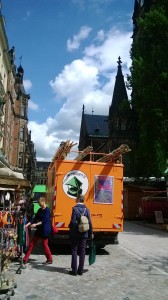 set up at the Martin-Luther-Kirche 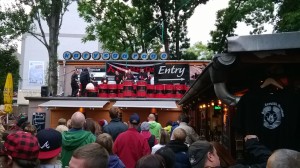 Blechlawine on the roof of Katy’s Garage 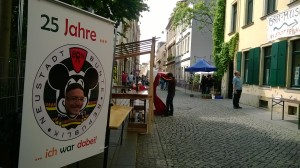 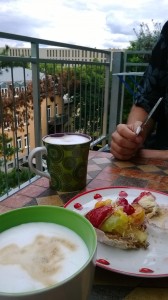 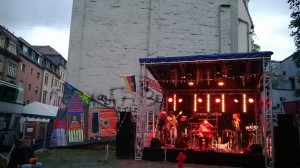 good spot to wait out the rain 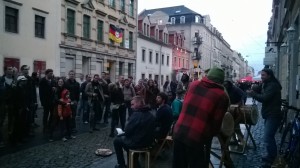 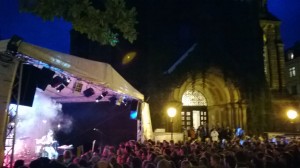