Elmar and I went to Berlin last weekend. By coincidence, it turned out to be the weekend of the Christopher Street Day pride parade/political demonstration. And by fate, it was also the day in which, through a court case, the US Supreme Court legalized same-sex marriage. 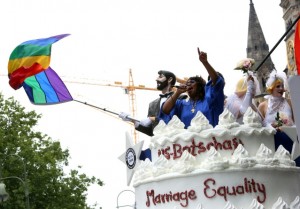 The US Embassy had a giant wedding cake float celebrating marriage equality. Stars designated each state and the date on which they had legalized same-sex marriage. States which had not legalized it had been left blank, then got their date stickered on at the last minute. There was something poetic about the whole thing, with the backdrop of the ruins of a church damaged in World War 2 in a thriving shopping district. Wounds can heal over time.

I’ve been to demonstrations in Berlin before. Most notably, in 2003, I went with a few of my study abroad students and friends to demonstrate against the Iraq War. We made a sign that read Amis gegen Krieg (Americans against war). A German woman was so touched that she cried and hugged us. During that semester, I often lied about my nationality. If people thought I was Canadian, I wouldn’t be forced to talk about politics for the millionth time. 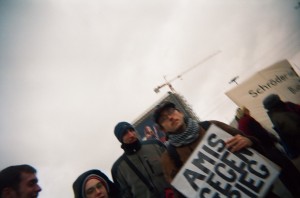 This time, I fought back tears. It’s the first time that I’ve been in progressive Germany and felt that my home country was doing the right thing. Even the fact that members of a US government office were able to participate in such an event in an official way, even before the ruling, was impressive. I don’t say this often, but last weekend I was proud to be an American.

Have a fabulous 4th of July! 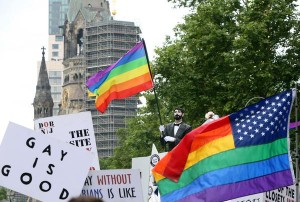